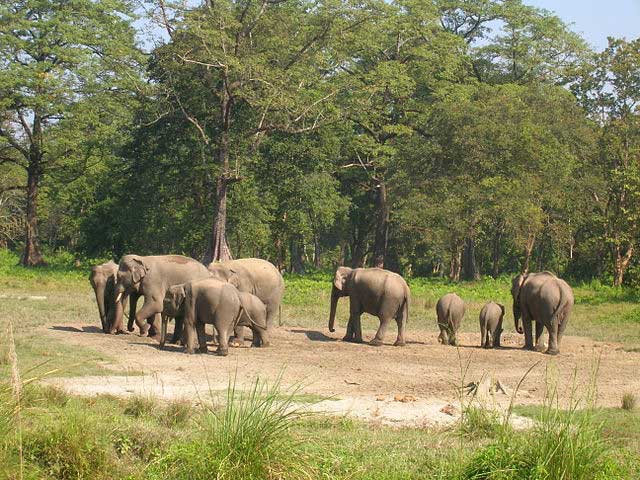 North Bengal has a vast expanse of densely forested area stretching from Cooch Behar to the Bhutan border lying at the foothills of the eastern Himalayas. The area covering almost 8800 square kilometers of swampy rain forests, covered with a thick canopy of deciduous trees and rich in wildlife is known as the Dooars. Blessed with a rich collection of flora and fauna and in an attempt to preserve the same, several wildlife sanctuaries and national parks have sprouted in this area. Several rivers like Teesta, Torsa, Jaldhaka and Murti flow through the forest adding charm and nurturing the natural beauties bestowed upon us.

Best time to visit (October to May) – Dooars can be visited anytime in the months of October to May. The weather in Dooars remains pleasantly cool at most times due to its thick vegetative cover. The summer months covering March to June have temperatures hovering around 30 degrees Celsius while the minimum temperature during winter (November to February) is around 10 degrees Celsius.

Dooars comprise of a large region covering several towns and villages and thus have several points of entry. Though Siliguri and New Jalpaiguri are most often preferred, Lataguri is a convenient town that has many hotels and resorts and is in close proximity to most of the national parks.

By Rail  – There are several railway stations that are quite near to Lataguri where one can stay during a visit. Hired cabs are available from all stations to take tourists to their destination. Some of the convenient stations are at:

By Road – The network of National Highways passes through many places in the Dooars region. Siliguri is one of the prime gateways to Dooars and buses run daily from there to Lataguri via Alipurduar and Madarihat.

By Air – Bagdogra airport is the nearest airport to get to Dooars. The airport is serviced by a large number of domestic and international flights. Cabs can be hired from the airport for the 2hrs drive to Lataguri (72kms) via Canal Road.

Dooars is all about forests and wildlife excursions form the major part of a trip to the region. There are a large number of wildlife sanctuaries and national parks that will keep you busy. Adding to the thrills of being in the midst of the pure dazzling beauty of nature, Dooars also provides you a plethora of outdoor activities to indulge in. Some of the places to definitely check out while you are there are:

Must Visit Places in Dooars

The Jaldapara Wildlife Sanctuary is the biggest of the forests in the Dooars region. Sprawled over 216.51 square kilometers of dense jungle, Jaldapara is famous for the Asiatic One Horned Rhino which is largely predominant in this sanctuary. The swampy forest with its tall grass and thickly covered by tall perennial trees is crisscrossed by several rivers and streams, the main source being the River Torsa. Rich in wildlife, one can spot several animals like the Sambar Deer, Huge Tusker Elephants, Leopards, Royal Bengal Tigers, Pythons and fresh water turtles among others. Early morning and late evenings are best for Indian Bison sighting. Bird Watching is one of the delightful activities to indulge in, especially for spotting the rare Bengal Florican.

The Holong Tourist Lodge located in the midst of the jungle is mostly preferred by tourists for a complete forest experience. However, this lodge is almost always full and should be booked well in advance. Alternatively, the Madarihat Tourist Lodge is also a good place to stay. The forest department conducts Elephant Safaris and the Jeep Safaris are available from the tourist lodge. Elephant Safaris are point booking, directly done from the forest gates.

Tips: Be sure to carry a pair of powerful binoculars, camera and a water bottle while going on a forest safari. 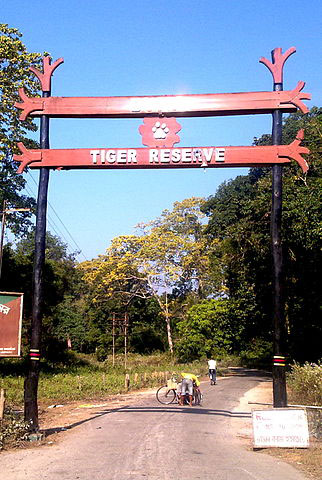 Located near the Bhutan border, the 760 square kilometer stretch of forest comprises the Buxa Tiger Reserve. The deciduous forest has a rich collection of the very elusive Royal Bengal Tiger and is a favorite destination for photographing the striped beauties. The reserve also acts as a gateway for Asiatic migration of elephants through the India-Bhutan border. The reserve is rich in fauna with almost 67 identified species of mammals and another 36 species of reptiles. Some of the animals that inhabit the forest, apart from the tigers, are the unique clouded leopards, Black Panthers, various types of deer, Malaysian Giant Squirrels, Indian and Palm Civets and Chinese Pangolin. Among the reptiles is the reticulated Regal Python. The reserve also has a rich flora that includes many medicinal shrubs and blooming orchid bushes.

Within the boundaries of the Buxa Tiger Reserve lie the ruins of the Buxa Fort, a landmark of historic significance. At one time, the fort had played a major role in the freedom movement of India and had served as a detention camp for many famous Indian freedom fighters.

Jeep Safaris are conducted throughout the day for INR 200.

Should Visit Places in Dooars

Located in the Terai region, Gorumara National Park covers about 80 square kilometer of forest region in the Dooars. Apart from the rich flora and fauna, the park also offers a few enjoyable entertainments for tourists. The exciting and bumpy Bullock Cart ride through the narrow spiraling paths of the forest in the evening makes for a thrilling once-in-a-lifetime experience. The deciduous forest is shaded under a canopy of huge trees like sal, teak, simul and khair. The Indian Rhinoceros is the most prevalent animal and there are little ponds dotting the forest where these animals congregate. Among others are wild elephants, bisons, deers and wild boars. A jeep safari through the forest takes you to several watch-towers like Chukchuki, Jatraprasad, Chapramari and Medhla. It then halts at an open area that has a rest house to freshen up. Here, tourists are entertained with a short tribal dance performance hosted by local tribal women. A cup of hot tea and biscuits are also served before the tourists start for their return journey.

On the eastern part of Dooars near Cooch Behar lies the Rasikbil Bird Sanctuary, its focal point being the huge Rasikbil Lake. Covered by lush green vegetation and the serene ambience with the sparkling water of the lake acting as a feeding point, this place is a bird-watchers’ paradise. Covering almost 175 hectares of land area, the sanctuary has a multi-tiered watch-tower that enables tourists and bird fanatics to watch in pin-drop silence and peace. The sanctuary is home to over a thousand species of land and water birds including a few rare species. Winter witnesses the arrival of a huge flock of migratory birds like different types of babblers, wagtails, storks, bee-eaters, kingfisher, Pochards, teals, shovelers, pintails and ducks.

Can Visit Places in Dooars

If you are an adventure person and is looking to camp out, Rocky Island in Dooars is the hub of outdoor activities. Situated on the banks of River Murti and at the foothills of the Neora Valley National Park, Rocky Island is located about 2kms from Samsing. Tucked away in the lap of the purest form of natural beauty with the river merrily flowing by and surrounded by huge rough-edged rocks, the place is a haven of camping sites. Adding to the thrill is a river-side cave to explore. The steep rock face provides ample opportunity to try your hand at rock-climbing and rapelling. An early morning bath in the sparkling cool water of the Murti River prepares you for a refreshing day. Evenings see bonfires lit up as groups of people gather to bond over food and music. There are several trekking and hiking trails leading from Rocky Island to beautiful scenic locations unraveling the intrigues of the forests and nature at every step.

Booking and camping paraphernalia can be obtained from travel agencies through their offices in Kolkata or online.
A visit to the Dooars makes for a thrilling experience and as you go deeper into the forests, the beauties of nature keep unraveling in front of your eyes. The forests of Dooars provide the wonders of bio-diversity at its phenomenal best!