In the middle of the rugged terrain of the Kumaon Region in Uttarakhand lies the bustling hill station of Nainital. A green valley alive with a diversity of flora and fauna, Nainital is surrounded by three mountains, the Naina Peak, the Deopatha Mountain and the Ayarpatta Peak and graced by the eye-shaped Naini Lake as its focal point. In a religious twist of mythological inference, it is believed that the eyes of Goddess Sati fell on the exact spot where now stands the Naini Lake and the Naina Devi Temple, making Nainital a well-known pilgrimage destination too, apart from being a favorite destination for nature-lovers and honeymooners.

Best time to visit (March to June) – As with all hill stations, the summer months of March to June provide the best time to enjoy a respite from the scorching heat of mainland cities. The weather is clear and pleasant and the temperature doesn’t exceed 25 degrees making it most favorable for boating and sight-seeing.

Good time to visit (October to February) – Nainital winters are very cold with temperatures almost touching zero degrees. End of December to January experiences some snowfall and heavy woolen clothes are required.
Tip: October brings Nainital alive in flashes of color and lights with the Navratri and Dussehra festivals in full swing making it the most preferable month for a visit.

Visit with Caution (July to September) – Nainital receives very heavy showers during the monsoon months of July to September. The roads become slippery and landslide alerts and roadblocks are high.

By Rail – The best way to reach Nainital is via its nearest railway station located at Kathgodam that serves as an entry point to the Kumaon region. The station has a wide network of trains from almost all major cities. At a distance of 34kms from Nainital, hired cabs take about an hour to reach the hill station.

By Road – Nainital is has a well-spread road infrastructure that connects it with all cities in India. The nearest metropolitan city is New Delhi that has a superb bus service plying daily between the two cities. The 320kms journey usually takes overnight but there are also some buses running during the daytime.

By Air – The only commercial airport nearest to Nainital is the Indira Gandhi International Airport at New Delhi. Buses and Prepaid Cabs are available from the airport to take tourists to Nainital.

The Pant Nagar Airport at a distance of 65kms from Nainital is a small airport that allows only private chartered flights to land. Seasonally, there are also a few commercial flights that land at this airport (check with airport for availability).

Nainital has many facets to it that promises on a refreshing yet action-packed vacation. Some of the places to check out are:

Must Visit Places in Nainital

Forming the central attraction of Nainital is the Naini Lake, a sparkling crescent-shaped freshwater lake shining brilliantly in the sun. The lake forms the most popular hangout area for tourists and locals alike, providing beautiful views of the surrounding Kumaon Hills and the city of Nainital. The lake is dotted with colorful gondola-like boats and coupled with the cool breeze blowing and the tranquil ambience provide a beautiful setting for some time in introspection and solitude. The bank of the lake is accentuated with clusters of trees like Oak, Pine, Cypress and weeping willows. Blooms of colorful roses and orchids grow in abundance. The lake also has an abundance of fishes including the imported Mirror Carp which is bred in the lake in an attempt to suppress the growth of malarial mosquitoes.

The Nainital Boat Club offers a range of boating experiences including yachting. The month of June brings a wave of color and pomp to the otherwise quiet hill station as the boat club flags off its Annual Kingfisher Yachting Competition. 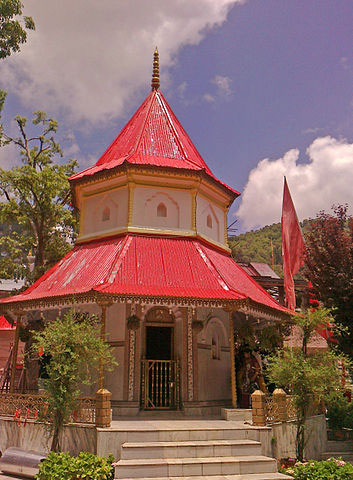 Located at the northern periphery of the Naini Lake and atop the Naina Hill is the Hindu temple of Naina Devi. In an intriguing fact from mythology, it is believed that Goddess Sati’s eyes had fallen in this region and thereafter, the temple was built in the auspicious area. The entrance of the bright red temple is flanked by a massive Peepal Tree (sacred to the Hindus) and the gates are guarded by a couple of huge lion. Apart from the black Shiva Linga (a representation of Lord Shiva), the other deities present in the temple are Lord Hanuman, Lord Ganesh and Goddess Kali. Being well-known as one of the most popular Shaktipeeths of India, the Naina Devi Temple witnesses a deluge of devotees throughout the year.

The festival of Navratri is celebrated at the temple premises with great ardor during September-October and one can closely witness the customs and traditions attached with the religious occasion. Shravani Mela in July-August and Chaitra Mela in March-April are some colorful fairs that are worth seeing.

Snow View Point at an altitude of 2270 meters above sea level and about 3kms from Nainital is the central hub of Nainital’s outdoor activities. The journey to the view-point starts with a thrilling Ropeway ride. The ride is a sensational experience with a spectacular bird’s eye view of Nainital spread far below. As you move further towards the Snow View Point, the first glimpses of the snow-covered peaks of the Himalayan Range appear, dazzling in the sun’s rays. At the view-point, one can indulge in a plethora of activities like rapelling and go-karting. A small amusement park with a few rides keeps the kids entertained. The major attraction is a big pair of binoculars installed at the view-point that gives you a stunning close-up view of some of the highest Himalayan Peaks like the Nanda Devi and Trishul mountains. Ensure to carry your best camera to this place that gives you ample opportunity to do some breath-taking photography.

Tip: Ropeways are usually full and same-day tickets are rarely available, so ensure to book the Ropeway a day or two in advance.

For those looking for a bit more adventure, a trekking trail leads from Nainital right upto the Snow View Point. And for a more convenient and comfortable journey, cabs are also available from Nainital to the view-point.

Should Visit Places in Nainital

The thrill of dark mysterious caves and mystical hanging gardens come alive in front of your eyes at the Eco Cave Gardens located in Mallital near Nainital. The rock-cut natural caves crisscrossed with narrow tunnels lit by petroleum lamps are especially a children’s delight. In an attempt to make it more exciting and educative for children, the caves that have naturally taken forms of different animals are named accordingly as Tiger Cave, Panther Cave, Bats Cave and so on. The dark and eerie interiors of the six caves immediately transform you into a visual representation of ancient cave-life. The caves open into a beautifully manicured garden and a spectacular musical fountain. The colorful water jets dancing to the tunes of the lilting music makes for a captivating audio-visual treat in the evening. 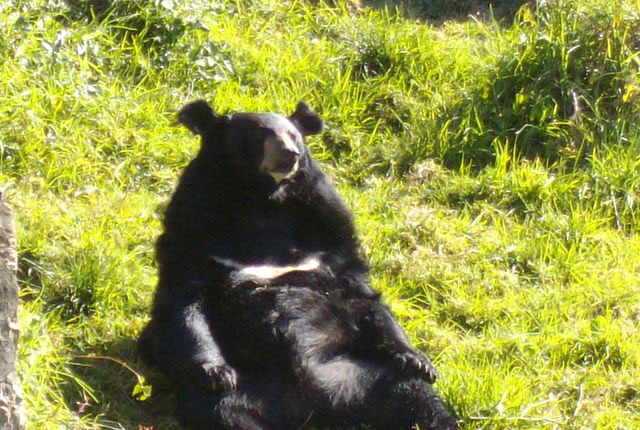 Nainital Zoo, a unique example of High Altitude Zoo in Nainital, was established in 1995 by Pt.G.B.Pant and showcases quite a large number of wild animals found in the hilly areas. Sprawled over 11 acres of land at an altitude of 6900 feet above sea-level, the zoo can prove to be a tad bit tiresome to traverse on foot due to its rugged terrain. However, jeeps along with guides are available from the gates to take you on a tour around the zoo. A treasure trove of Himalayan wildlife, the zoo has amongst its diverse inhabitants, several endangered species. The snow leopard, Tibetan Wolf, the Himalayan Bear, the Golden Pheasant and the majestic white and rainbow colored peacocks are treats to watch and photograph.

At 7520 feet above sea level atop the Ayarpatta Hill, Tiffin Top is a utopia for artists and photographers who flock in the area to capture the captivating beauty of nature. Very popular with the locals of Nainital and its neighboring regions, the Tiffin Top or Dorothy’s Seat as it is also known, serves as an idyllic picnic spot. Surrounded by dense emerald vegetation, the view-point overlooks the hills and valleys and provides magnificent views of sheer scenic beauty. The snow-clad peaks in the far-off horizon standing high covered in a hazy film of mist and cloud has a heavenly feel. A beautiful bench curved out of stone and embellished with ornate patterns adorns the face of the Tiffin Top. One has to either trek a bit through a narrow spiraling cobblestoned path or ride a pony to reach the view-point.

Can Visit Places in Nainital

If bird-watching is your cup of tea, the Kilbury Bird Sanctuary is your paradise. Located 12kms from Nainital and bordering a reserve forest is the lush green sanctuary serving home to more than 580 species of birds. Having the privilege of a dense cover of tall pine, oak and rhododendron trees, the sanctuary provides ample nesting opportunities for migratory birds that fly in during the nesting season. The tranquil ambience has a soothing effect on the nerves as people wait quietly to spot the birds while enjoying a leisurely picnic at the sanctuary. Among the birds to look out for are the exotic Brown Wood Owl, White-throated Laughing Thrushes, Collared Grosbeaks and several varieties of Forktails. The sanctuary is also equipped with a well-maintained forest bungalow where tourists can stay. Additionally there are a few camping sites located in the nearby Sigri region bringing bird-watchers nearer to nature.

If the sky and the wonders of the universe with its magical stars and unending void allure you, the Aryabatta Research Institute of Observational Sciences (ARIES) located on Manora Peak, 4.5kms from Nainital makes for a learning experience. The observatory conducts vast research on astrophysics and has a wide range of fascinating instruments and telescopes. Tourists visiting the observatory during the daytime can avail guided tours around the place with an opportunity to try out the array of instrumentation. Provided the day is clear and cloudless, one can have an amazing view of the moving celestial bodies and watch the various satellites that float in space. Night visit is also available on clear moonlit nights for which a tour permit has to be obtained separately in advance.

An Eden amidst the untouched beauty of nature, with its ravishing views of the Himalayan Range and exciting adventures waiting in its many interesting places, Nainital is a soothing yet exhilarating retreat for those seeking to refresh themselves from bustling big city lives.