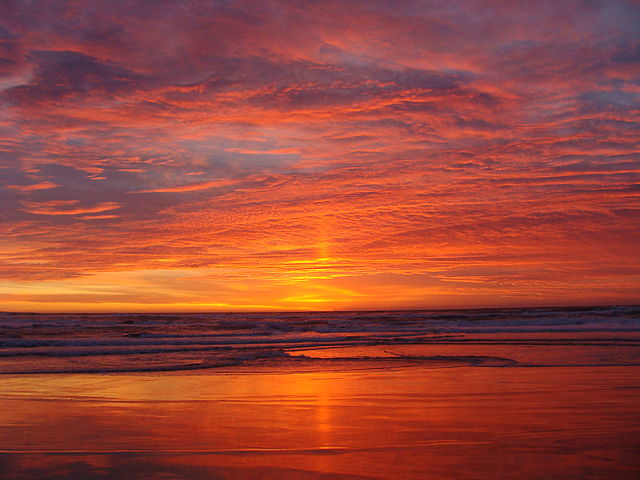 Bordering the vast expanse of the Bay of Bengal, the coastal metropolitan city of Chennai is the State Capital of Tamil Nadu in South India. Formerly known as Madras, the bustling city is an industrial and cultural extravaganza steeped in the rich, colorful and unique characterization of South Indian heritage. Ranked fourth as both the largest and most populated city of India, Chennai is aptly nicknamed “Detroit of India” for its hi-tech automobile industry. Lined with lovely beaches on the Coromandel Coast and filled with numerous historical monuments and landmarks at every nook and corner, Chennai is a breathless wave of thrilling experiences that lingers in the memory for a long time.

Best time to visit (October to February) – Winter is the best time to visit Chennai when the otherwise hot and humid weather mildly cools down to about 18 degrees Celsius, thus making it preferable for sight-seeing and outdoor activities. Only light woolens are required at night and the mornings get quite a few hours of sunshine.
The festivals to definitely look out for during this time are:

Good time to visit (June to September) – Being a coastal city, the tropical monsoons of Chennai experience quite heavy showers of rainfall. Weather is usually on the cooler side and the city gleams and sparkles, freshly washed in the rain water and is quite pleasant for a visit.

Visit with Caution (March to May) – Chennai Summers are very hot and humid making any kind of outdoor exploration a very uncomfortable. Temperatures go much beyond 40 degrees Celsius and scorching heat envelopes the city making it the least favorite time to visit.

By Air  – The enormous Chennai International Airport is the third busiest in the country and serves as the most preferred gateway to the city. The airport is serviced by all major domestic and international flights.

By Rail – Chennai is connected to the rest of India through a wide network of railway tracks, its two major stations being the Chennai Central and the Chennai Egmore.

By Road – Chennai is well-connected with all major cities of India through the network of National Highways. The city houses Asia’s biggest Bus Terminus and many buses and cabs ply daily from the city to its neighboring regions.

Sea Link – Privileged with a generous stretch of coastal area, Chennai has two busy ports that service mainly cargo ships. However, the Port of Chennai also has a couple of cruise ships linking the city by sea to its neighboring Andaman & Nicobar Islands (Port Blair) and also with the Port of Colombo, Sri Lanka.

Among the most interesting places to explore in Chennai are:

Must Visit Places in Chennai

Officially the second longest natural urban beach in the world, the Marina beach is also the busiest one in India. Stretching over 13kms along the Bay of Bengal shoreline, the Marina Beach offers a plethora of exciting activities. Thousands of people throng the beach throughout the day making it a merry and colorful panorama. The beach is dotted with endless number of Chennai’s authentic street food stalls to appease your appetite while spending a few hours in solitude or bonding with your loved ones. There is a string of statues and monuments dotting the periphery of the beach. Among the fun activities are horseback and pony riding, kite-flying and beach cricket. Since the wild water of Bay of Bengal is unsuitable for bathing and swimming, the nearby Marina Swimming Pool serves the purpose.

Tip: Take a barefoot walk on the soft golden sand towards the Neelankarai section of the beach where the critically endangered species of Olive Ridley Turtles nest and you might just encounter one. 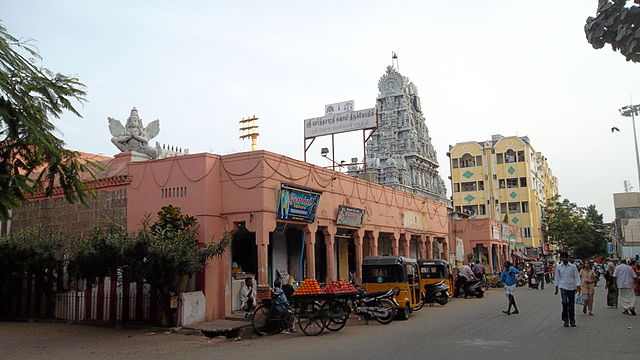 Dating back to the 8th Century, Sri Parthasarathy Temple is one of the most popular pilgrimage destinations for Lord Vishnu devotees. Located in Triplicane in Chennai, the temple shows-off some spectacular Dravidian Architecture with ornate designs skillfully carved into the massive pillars and towers. The idols representing five different incarnations of Lord Vishnu form the central attraction of the temple along with a 9 feet tall statue of the Presiding Deity. Steeped in rich history, there are many stories one learns about the temple that are significantly cited in many mythological manuscripts. A holy water tank consisting of five sacred wells grace the grounds of the temple.

The temple is also a popular venue for a string of colorful religious festivals. Notable among them are: 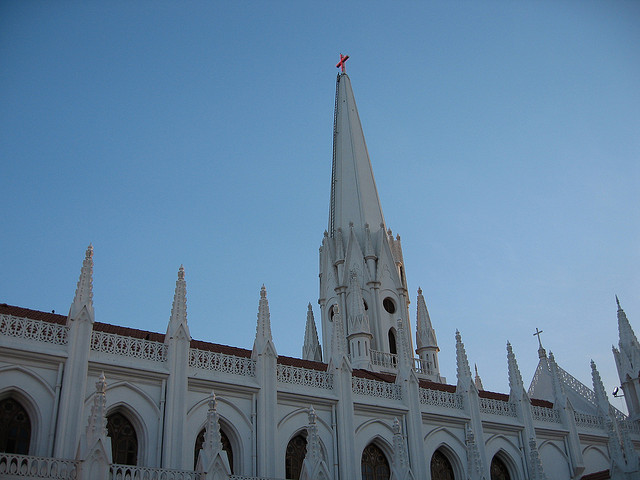 Built initially by the Portuguese in the 16th Century, the Santhome Cathedral is an epitome of beauty. The monumental building boasts of Neo-Gothic style architecture with a 183 feet tall central spire. Its spotless white exterior and the colorful stained glass windows further add to its charm. Dedicated to St.Thomas, the church houses his tomb and also has a mini-museum that displays a range of items that belonged to him. The ornately decorated interior walls of the cathedral hold several inscriptions that tell various stories about the life of St.Thomas. The cathedral holds mass and confession sessions daily in English and Tamil languages.

The grandiose church is further complimented with an equally beautiful exterior landscape. The emerald lawns are resplendent with a well-maintained garden featuring colorful and aromatic blooms complete with a lily pond at one corner. 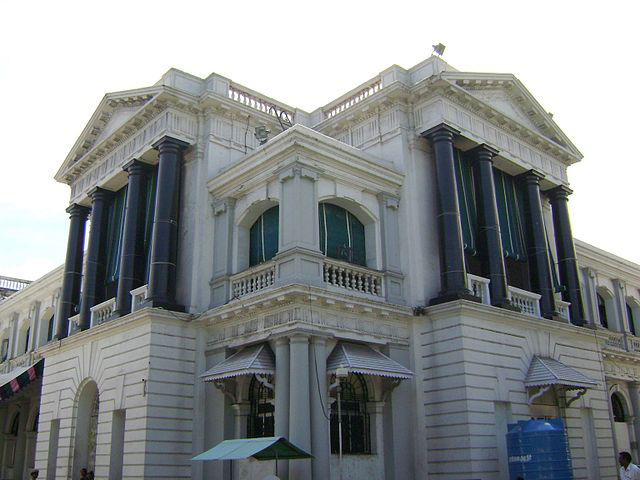 From Public Domain, via Wikimedia Commons

Essentially an archeological site, the 17th Century Fort St. George is a significant historical landmark left behind by the British. Once the property of the British East India Company, the fort, now, is a museum that exhibits more than six hundred antique items belonging to the British Era. Surrounded by a 6 meter high wall, the fort complex also houses the legislative assembly of Tamil Nadu, some government offices and a church besides the museum. A 150 feet tall teakwood flag-staff known to be the second-tallest one in India stands inside the complex.

The Museum is housed in a 3-storeyed building divided into 10 galleries holding different categories of exhibits. Among the vast display are coats of armors, military weapons, uniforms and medals, porcelains, china-wares and other artifacts. A massive statue of Lorn Cornwallis takes the center stage in the museum. The walls of the museum are adorned with paintings of famous people and other documents and letters pertaining to the British Era.

*Free entry for children below 15yrs

Should Visit Places in Chennai 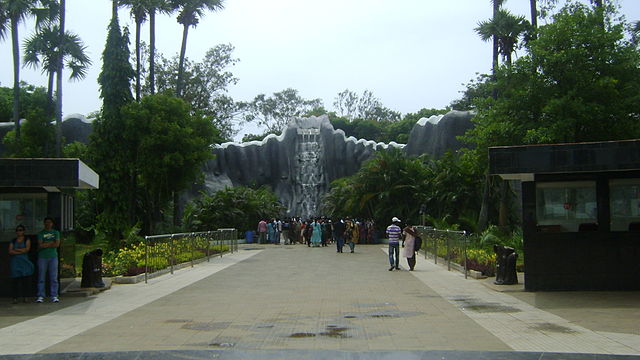 Notably the largest zoo in South Asia, the Arignar Anna Zoological Park is located in Vandalur, 32kms outside Chennai. Covering an astounding 1490 acres of dense vegetation, the zoo is a gold-mine of every kind of conceivable wildlife including rare and endangered species. Preserved and developed with intense care, the zoo also houses a wildlife rescue and rehabilitation centre along with separate enclosures, and man-made wet and dry islands to provide the animals a natural habitat for themselves. The zoo also has a butterfly enclosure, a veterinary hospital, a library, a children’s park and a zoo club. The wide range of fauna includes more than 1500 species of wild animals including birds, reptiles, mammals, amphibians and fishes. When it comes to entertainment of the tourists though, the Chimpanzee literally takes the cake away!

Thrilling Night Safaris, Elephant Rides and Lion Safaris are arranged by the zoo authorities. In addition, there are battery-operated cars and caged vehicles that take tourists on a tour through the wide network of roads that crisscross the zoo. 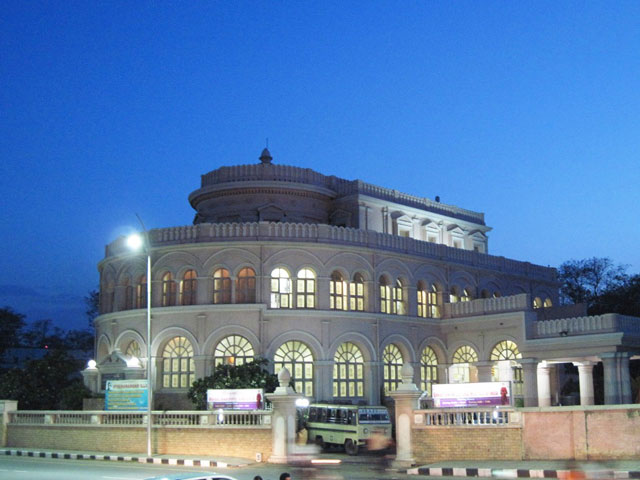 A prominent mark of historic significance, the Vivekananda House (formerly known as the Ice House) is a favorite destination for Swami Vivekananda followers. The Victorian styled mansion, accessible from the Marina Beach is a museum of Indian Culture, fully equipped with a 3D Theatre. Separate chambers inside the round building have different sections of exhibits like ancient paintings, a photo gallery containing rare pictures from Swamiji’s life and times and the bedroom with all the things used by Swamiji during his stay in the house. Another section holds a vast array of plaques and motifs with the Swamiji’s famous quotations and teachings embossed on them. There is also a small counter from where one can buy such wall-hangings and plaques.

Various 3D movies and video clips are screened daily in the theatre apart from hosting seminars and educative talk-shows on the life of Swami Vivekananda. 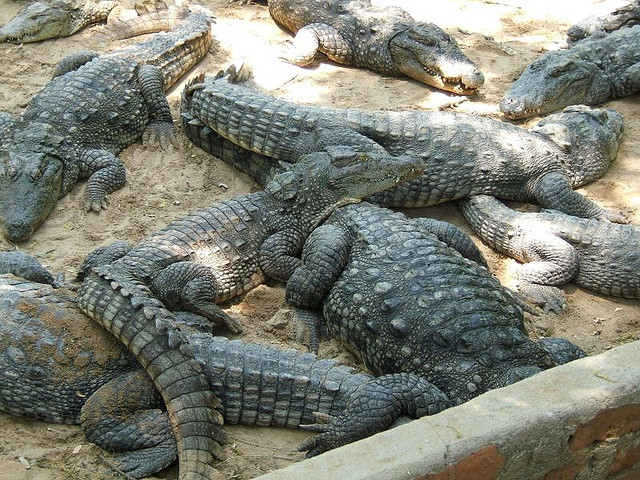 For those interested in Herpetology and behavioral study of reptiles, the Crocodile Bank provides an exclusive learning experience on the same. The park, located in the Vadanemmeli region in Chennai, is a non-profit organization dedicated to the protection and breeding of several reptiles, the crocodile being their primary focus. Known as the largest Crocodile Sanctuary of India, the park houses more than 14 species of crocodiles and alligators and over 2500 types of reptiles. Apart from the crocodiles, the park also breeds the critically endangered Olive Ridley Turtles. On a tour of the Crocodile Conservation Center, one can closely watch the breeding techniques and learn about the vast reptile researches that the organization conducts. 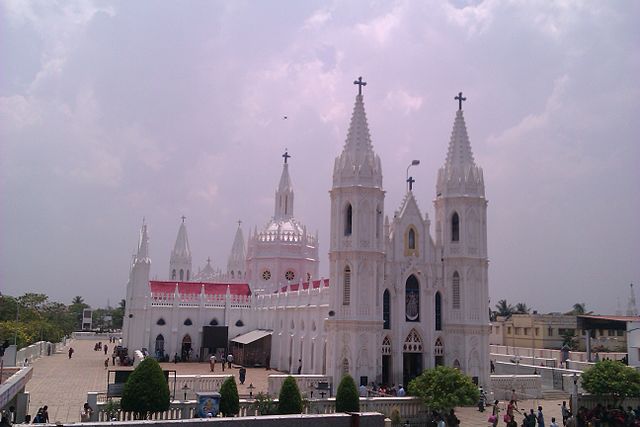 The regal Basilica of Our Lady of Good Health, popularly known as the Vellankani Shrine is nothing short of breath-taking. The striking Gothic-style architecture with its white-washed external walls and twin spires is a delight for photography fanatics. Within the church compound are housed the Nadu Thittu shrine, the Adoration and Reconciliation Chapel, the Our Lady’s Pond and separate Stations of the Cross, Rosary and Sacrament. The compound that opens into the Vellankani Beach also has the Church Museum and the Priest’s House. The white marble central altar with the ornately decorated and strategically illuminated arch in the backdrop dominates the interiors of the shrine.

The Roman Catholic Basilica holds mass and sermons at fixed hours throughout the day and is also equipped with the appropriate technology for live-streaming on its official website.

Can Visit Places in Chennai 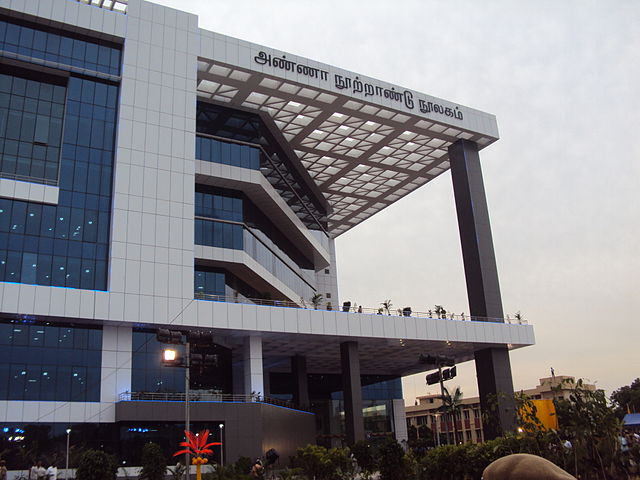 From Public Domain, via Wikimedia Commons

Located in Kotturpuram, Chennai, the Anna Centenary Library is a book-lover’s paradise. The fully air-conditioned 8-storeyed building was opened fairly recently in 2010 and has one of the largest collection of books on diverse subjects. The Book sections spread over 7 of the 8 floors are accurately categorized into Children’s Books, English & Tamil literature, Periodicals and a plethora of specific subjects. The ground floor, however, holds the most fascinating sections of all. There is a Braille Section holding a large collection of books for the blind, an Own Book Reading Section, a well-stocked Newspapers & Magazines Section and a children’s play area equipped with indoor rides, video-games and multimedia kits to keep the kids busy. The library compound also houses a Seminar Hall, an Amphitheatre and a 1500-seater Auditorium where talk-shows are hosted with many famous people in attendance.

The Theosophical Society, promoting philosophy and spirituality, is a global community with branches all over the world. The society doesn’t discriminate between any race, creed or religion and goes by the motto “There is no religion higher than truth”. The Chennai Branch of the Theosophical Society is located in Adyar inside 260 acres of beautifully-manicured Huddleston Gardens. The mystical garden is covered under a canopy of trees, notably the exotic Mahogany. The 450yrs old Banyan tree with its aerial roots spreading over almost 60,000 square meters is an eye-catcher. The compound has a church, a mosque, a Buddhist shrine, a Hindu and a Zoroastrian Temples all packed within the confines of its boundary. Walking in the tranquil gardens serve as a soothing balm and provides a suitable ambience for meditation. The library in the main building has many books related to philosophy and spirituality. Among its prized collections are ancient handmade bibles and age-old Buddhist scrolls.

The bustling metropolitan city of Chennai has the above and much more to offer that makes for an exhilarating action-packed vacation!