Gangtok, the Capital city of Sikkim lies at 5410 feet above sea-level and has all the glories of a hill station wrapped into it. The main inhabitants of the city are the charming Lepchas, Nepalese and Bhutias who migrated and settled in the region from different parts of Nepal and Bhutan. The most dominant religion in Sikkim being Buddhism, the region is home to a large number of colorful monasteries and the predominant sight of saffron robe clad monks thronging the roads. Due to its rocky mountainous terrain, Gangtok portrays a picture of true scenic beauty with emerald valleys and many gurgling waterfalls.

The weather in Gangtok generally remains cool throughout the year due to its proximity to the Himalayan Range. Light to heavy woolens are required almost all around the year.

Best time to visit (March to June) – The spring and summer months of March to June is the best time to visit Gangtok. The temperature is a pleasant 22 degrees that falls quite a bit during the night. Light woolens may be required due to the cold breeze that blows continuously. This is the time when one can enjoy the adventure sports to the fullest and do some great photography enabled by clear visibility. Spring is also the time when the Annual Orchid Flower Show is held in Gangtok.

Good time to visit (October to February) – The autumn month of October and November is extremely pleasant and clear and is a good time to visit Gangtok. This is when the monsoon showers recede and winter is just around the corner. The days become shorter as the temperature falls to around 4 degrees Celsius by December. Heavy woolens will be required at all times, especially for the cool breeze blowing all the time. Most of the popular and colorful festivals like the Annual Winter Carnival in December and the Tibetan New Year celebrations in February.

Visit with Caution (July to September) – During the three months of monsoon, Gangtok experiences very heavy rainfall. The roads become slippery with the fierceness of the numerous waterfalls and the risk of landslides is very high. If visiting during this time, landslide alerts should be noted with care. Also carrying some moderate woolens and umbrellas is advisable.

Like all hill stations, the steep mountainous terrain of Gangtok doesn’t allow rail or flights into the city. The only way to get to the city is by road. The drive though, is an extremely pleasant one presenting the beautiful panoramic view of the surroundings as you weave through the narrow mountain roads. The occasional waterfalls and the narrow bridges over small streams make the journey a thrilling experience.

By Road – Gangtok is connected by the National Highways to all other cities in India. The nearest cities are Kolkata, Siliguri or any of the North Bengal hill stations like Darjeeling and Kalimpong. There are several resting places and cafes available on the way to halt and freshen up during the long drives.

By Air – If time is of essence, the most convenient and less time-consuming way to reach Gangtok would be by air. The nearest airport at Bagdogra is about 124kms from Gangtok and is serviced by flights from all over India. Cabs and buses can be hired from the airport and takes around 3.5hrs to reach Gangtok.

Alternatively – Bagdogra has a helicopter service where a chopper can be hired to take you to the helipad in Gangtok. Check with the airport authorities and Sikkim Tourism for the timings and fares to avail the service. The 20mins ride however, is a bit on the expensive side.

By Rail – The nearest railway station is at New Jalpaiguri, about 120kms from Gangtok. The station is well connected with trains coming in from different parts of India. Cabs and buses are available on hire and take around 3hrs to reach Gangtok.
Gangtok with its pleasant temperate climate, beautiful scenic beauty, graceful waterfalls and a colorful culture enhanced by the warmth and hospitality of its people make it a favorite hotspot for tourists and a honeymooner’s paradise.
The places to check out while there are:

Must Visit Places in Gangtok 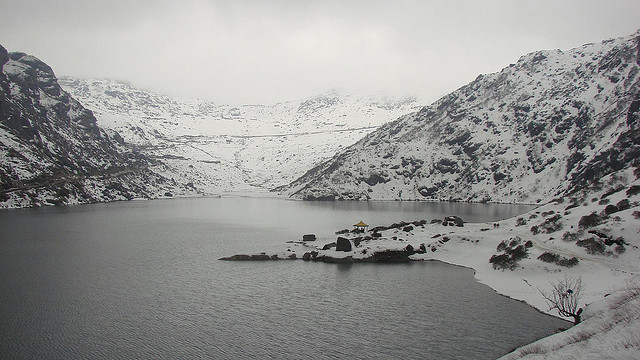 Photo by Sankara Subramanian, CC BY 2.0

The enchanting environment of Tsangu or Tsomgo Lake located at a distance of 40kms from Gangtok is a sheet of white marvel. The entire area, at an elevation of 12,313 feet above sea level, is covered in snow almost throughout the year. The Lake itself is frozen during the winter. However, in the summer, the clear water of the lake lies unfrozen in all its sparkling and shining brilliance. Most fascinating is the fact that the lake water takes on a different hue at every change of season. The shadow of the surrounding mountains falling on the lake is a captivating sight.

There are several stalls lining the area near the lake. One can enjoy the surrounding while munching on several delicacies that are on sale. There are also some stalls that provide snow boots on hire to walk around when the snow is very deep during the winter months. Riding on one of the beautifully decorated, domesticated Yaks make it a memorable visit for all, especially the children.

Buddhism being the dominant religion among the Sikkimise, the state is graced by many Buddhist monasteries. One of the most popular among them is the Ranka Monastery. Tucked in the lap of nature, surrounded by dense greenery, the bright red monastery stands high and mighty in its sprawling campus about 20kms from Gangtok. The drive up to the monastery is a bumpy ride but the beautiful experience waiting at the monastery makes it worth the effort.

As you enter through the wide gates of the monastery, you will encounter a lively group of young Lama Children in their saffron robes playing in the open courtyard. Their charm and friendly demeanor is immediately enticing as they freely pose with you for a couple of photographs. Access to the monastery is free and one of the elder Lamas may willingly give a tour of the interiors while explaining their beliefs and way of life. The stunning architecture, the intricately ornate interiors and the huge golden statue of Lord Buddha makes for some beautiful photography. 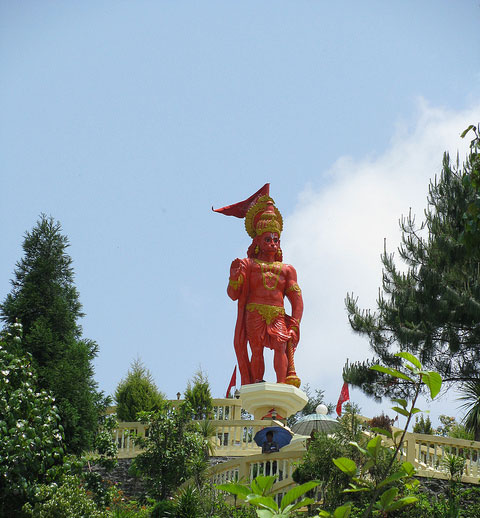 Set on a high hill-top at 7200 feet, Hanuman Tok is a Hindu temple dedicated to Lord Hanuman. Apart from being a popular tourist spot, a large number of pilgrims visit the temple to offer prayers. A number of stairs need to be climbed in order to reach the temple. However, there are beautiful curved benches at intervals where one can take a break from the climb. The temple complex has a serene ambience occasionally broken by the echoing tingle of the many bells suspended from the temple ceiling. Sometimes, especially during special prayers or festivals, religious music and chants are played in the strategically placed amplifiers inside the temple.

What steals the show at Hanuman Tok though, is the stunning view of Mount Kanchenjungha from the nearby view-point. The panorama spread in front shows the sheer brilliance of nature that can be beautifully captured in the lenses of a camera.

Should Visit Places in Gangtok 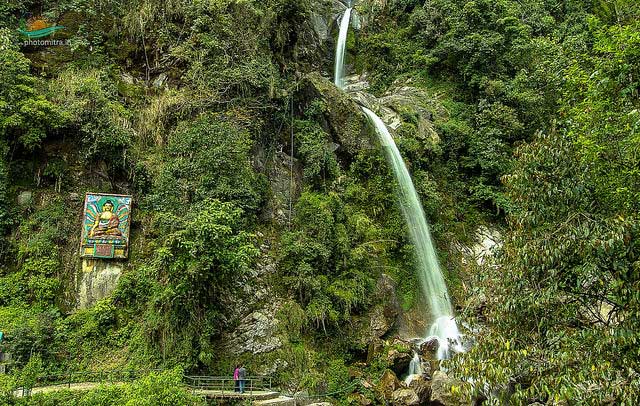 True to its name, the immense Seven Sisters Waterfall falls at seven intervals one after the other cut deep into the mountain side close to the main road. It is around 32kms from Gangtok and provides a mesmerizing view surrounded by lush greenery. The waterfall, though a calm drizzle during the summer and winter, becomes quite fierce during the monsoon. As the popularity of the magnificent waterfall increased in the last few years, several elevated stands were constructed to view the falls from different angles. One can also cross a small wooden bridge to get close enough to the falls to touch the cool sparkling water. Apart from a place of relaxation, this site is also a popular for photo-shoots and picnics.

The waterfall makes for a short halt during a day’s site-seeing. One can relax and freshen up at the nearby cafeteria while enjoying the view.

Tashi View-point is a small flat area atop a hill that overlooks the mighty Himalayan Range. The view-point, barely 7kms from Gangtok, provides a 360-degree bird’s eye view of the surrounding hills and valleys straddled by a couple of brightly colored monasteries is a photographer’s delight. This is also the point in Gangtok that has the best views of the snow-capped Mount Kanchenjungha and Mount Siniolchu. There are several stalls in the vicinity from where you can buy some memorabilia to take away with you.

Caution: Elderly visitors might find it a bit difficult to climb the steep roughly cut stairway leading to the view-point.

Can Visit Places in Gangtok 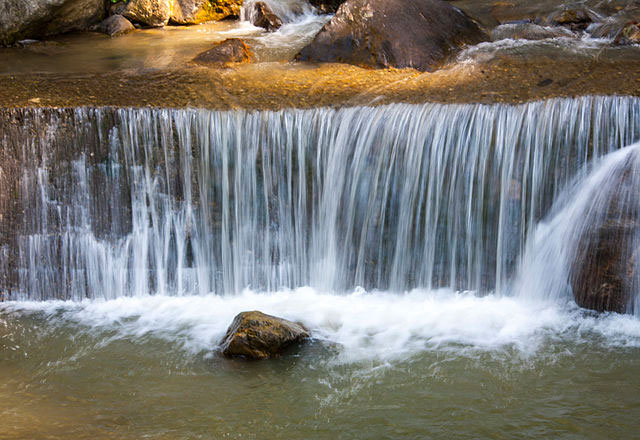 The focal point of a beautifully decorated park, located just near the Ranka Monastery and about 7kms from Gangtok, the Banjhakri Falls is a beauty to look at. The park, surrounded by dense vegetation, is a popular picnic spot for tourists and locals alike. The 2-acres of land on which the park lies has a man-made lake, a gazebo to keep the children happy and numerous sculptures and statues that reflect authentic Sikkimese architecture. Some quiet time spent at the lake-side with the magnificent waterfall in the backdrop makes for a relaxing experience.

Like most cities in India, Gangtok also has its own zoological park showcasing quite a few of its wildlife. Located 6kms from Gangtok, the zoo is spread over 230 hectares of land at about 8000 feet above sea-level. One can either choose to walk around the park which proves to be quite time-consuming due to the hilly terrain. The best way to tour the entire zoo is to hire one of the jeeps available in the park. At the zoo, one can witness quite a few rare Himalayan wildlife. Notable among them are the Red Panda, Snow Leopard and Himalayan Black Bear. The Golden and Silver pheasants are a treat to watch among the birds.

Gangtok boasts of all the numerous facets of the true beauty of a hill stations and has much in store to make it an interesting place. Coupled with its charming and friendly people, Gangtok has much to offer and makes for a lovely memorable vacation!