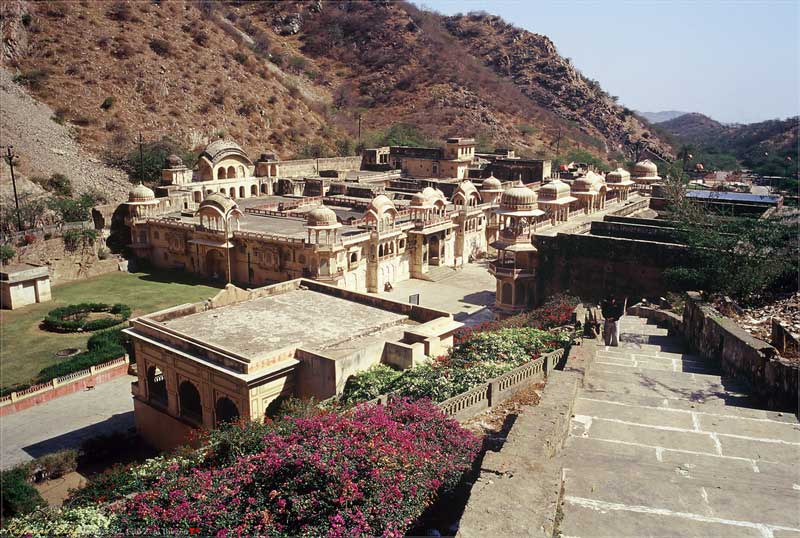 Located at a short distance of approximately 10 kilometers from Jaipur, Galta Ji or Galwar Bagh is a famous Hindu pilgrimage site dedicated to the Vaishnava sect. The complex is named after the Hindu saint Galav who lived and meditated at this place in the ancient times. It is believed that his meditation and penance was rewarded when the holy Ganges appeared at the site from the mouth of the Gaumukh located in the precincts of the temple. Believing the water to be from the Holy Ganges, the temple contains several ponds and step wells, which are used by the pilgrims and the devotees. Although the site is believed to have existed since Satya Yuga (an ancient period in the Hindu scriptures), the temples were constructed during the reign of Sawai Jai Singh II in the 1800s. Most temples in this complex are built with a signature Hindu Rajput style and feature chhatris and several natural springs. The main pond known as the Galta ji Kund, which never dried out even in the harshest of desert heat, is a major attraction here. It is also known by the locals as the monkey temple due to the thriving population of the rhesus macaques that live here. The temple is open all days including the weekends and can be visited during any time of the day. However, it is better to avoid visiting after sunset as the place is a little secluded from the city and might get a little unsafe for lonely excursions.