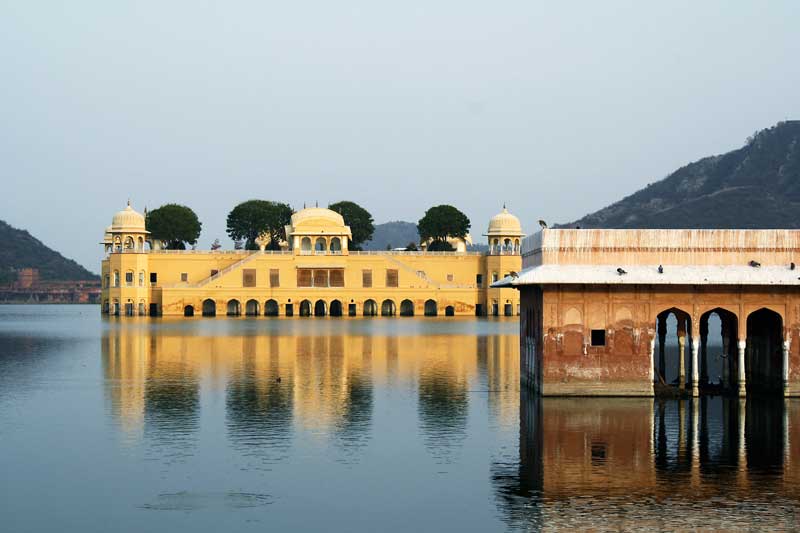 The name Jal Mahal translates to ‘Water Palace’ in Hindi and refers to an 18th century palace constructed during the reign of Sawai Jai Singh II. The palace is set in the heart of the Man Sagar Lake, which is surrounded by the picturesque hills of the Aravali Range. The building started as a simple dam to store water during the 17th century and was later expanded into a palatial structure. Jal Mahal is also in close proximity to other monuments like Amer fort, Kanak Vrindavan, Kanak Ghati and Gaitore. Although the palace is not open for visitors currently and there are no boat rides available to reach the palace. The kilometer long promenade in front of the lake is a great place to enjoy the views during the mornings and evenings.

The palace itself is a marvelous example of various Indian and Islamic architectural styles brought together and features the traditional Rajput Chhatris on its 4 corners. The central chhatri in the middle is a rectangular one, much akin to that of Bengali Hindu structures. As the palace is located on route to the Amer Fort, it becomes an essential rest stop for the tourists, who can enjoy a relaxing evening here. One can also enjoy a plethora of activities such as Elephant Rides, Photography, and enchanting palace lights after sunset. Visiting during the winters can also be a great way to photograph some rare species of migratory birds. Visitors can also dine at some of the traditional Rajasthani restaurants located nearby.