The picturesque valley of Manali in Himachal Pradesh lies cuddled in the Northern end of Kullu district at an altitude of 6726 ft. The charming hill station with all its beauty is a paradise for honeymooners and couples looking to spend some quiet time in privacy. The white water of the Beas River gurgling through the town adds an element of romance to its environment. With the surrounding snow-capped mountains, beautiful waterfalls, the flowing river and sparkling colorful leaves of the tall trees, Manali looks like a canvas of beautiful oil painting!

When to visit?
Owing to its high altitude and surrounding mountains, the weather in Manali remains cool throughout the year.

Best time to visit (March to June) – The dry summer months of March to June is the best time to indulge in a wide range of adventure sports and hiking. The temperatures are a pleasant 10-25 degrees Celsius. The daytime gets several hours of sunrays but it is advisable to carry some light woolens for the nights that become rather chilly. The famous Hadimba Devi Festival is hosted during May, when the temple complex comes alive with colorful stalls. Vasantotsav held in Kullu in March every year is a Carnival-like affair with colorful stalls and lot of activities.

Good time to visit (November to February) – The winter months experience heavy snowfall and makes Manali a haven for winter sports. Be sure to carry a considerable number of heavy woolens, as temperatures fall below zero degrees during this time. However, it is advisable to be alert as this season calls for avalanches and some roads might be slippery and closed due to the snow.

Visit with Caution (July to October) – This is the monsoon season when Manali gets a considerable amount of rain. The roads become slippery and risk of landslides in high. However, if you are visiting at this time, it is worthwhile to catch the brilliant Dussehra festival, the festival of lights that takes place in October.

How to reach?
By Road – The best way to get to Manali is by road. Though it is quite a long drive from all cities, the road to Manali is one that will leave you stunned by its sheer beauty. The road is accentuated by steep mountains on one side and deep valley on the other with the Beas River flowing far below. The ride gives you an excellent view of the surrounding mountains dotted with ravines of tall trees and takes you through tiny hill villages.

Tip: Kullu is famous for producing rich red apples that thrive during the months of August to October. A stretch of road between Kullu to Manali near the small village of Jana is lined with apple trees. Keep an eye out and grab an apple or two while you pass this stretch!

Several buses and cabs run from the nearest cities:

By Air – Reaching Manali by air is far more quick and convenient, though the journey is devoid of the beautiful scenery that you witness on the road. The nearest airport is Bhunter Airport in Kullu, a mere 50kms from Manali. There are several flights connecting Bhunter to all major airports in India. However, flight schedules often get changed or cancelled depending on the weather.

By Rail – Reaching Manali by rail is not a very good option. The nearest station is Kalka or Chandigarh from where you will still have to take a bus or cab by road to Manali.

Manali being a true romantic destination for honeymooners, have several places of interest that will take your breath away. Outdoors is the place to be when you are visiting Manali as a walk down the narrow roads, along the soothing Beas River and exploring its various wonders make for a lovely bonding time.

Some of the places to check out from Manali are:

Must Visit Places in Manali 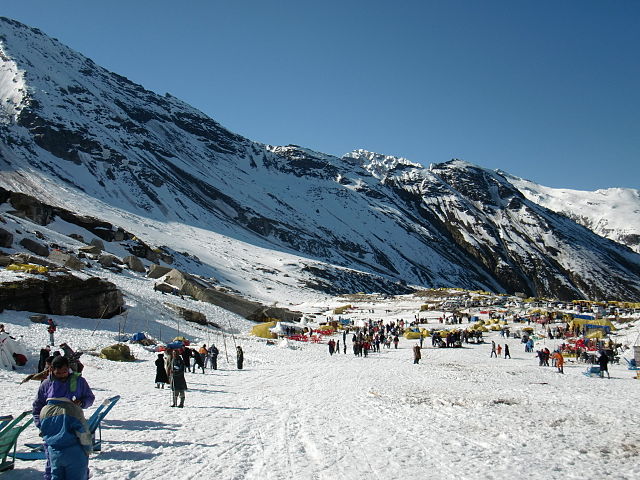 At an elevation of 13,051 feet above sea-level, the frozen area of Rohtang Pass is a must visit while you are in Manali. The famous pass connects Kullu Valley to Lahaul and Spiti Valleys.

The road to Rohtang Pass is one bumpy ride though. It is better to go there in a hired cab with an experienced driver who can maneuver the vehicle through the road simply cut out from the rock-face. The first part of the drive as you start from Manali is quite a pleasant one though. The temperature difference is distinctly felt as you move higher and the wind becomes much cooler. Be sure to halt at the area lined with stalls renting out heavy coats, jackets, boots, gloves and caps that will be required to be worn as Rohtang pass is covered in a thick blanket of snow throughout the year.

Though the drive to Rohtang Pass is a somewhat scary roller-coaster ride, you will be immediately taken in by the astounding views as you reach the flat area that marks the destination. There are several stalls and shops here that can be visited for a cup of hot coffee and other snacks. 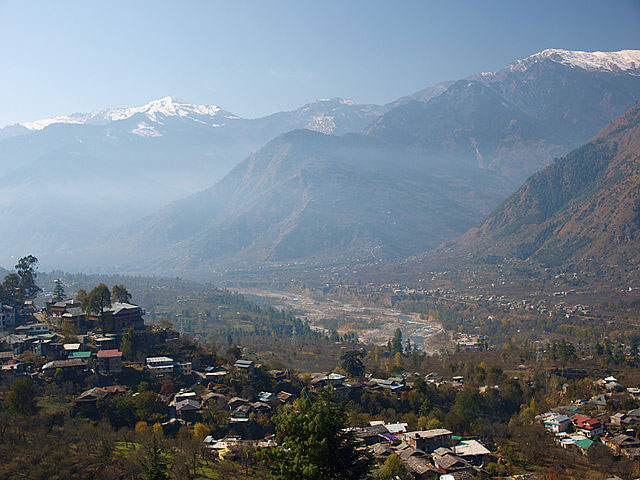 Photo by Dainis Matisons, CC BY 2.0

A day’s visit to the quaint town of Kullu is a must while you are vacationing in Manali. Kullu is a canvas of lush greenery accentuated with rolling hills, dotted with clusters of colorful little wooden houses and the Beas River snaking through it. A drive through the town takes you through mesmerizing landscape, hairpin bends of the road and along the banks of the river Beas. March to October is the best time to visit Kullu when you can best come into contact with its true natural beauty as you backpack and trek the narrow mountain paths. There are several temples and monasteries that you can visit while you are there. The natural hot springs at Manikaran which is a Sikh Gurudwara (the place of worship for the Sikh) is a must visit, though the only way to reach the place is a long walk through a narrow alleyway. However, its major attraction is the natural hot water springs and how they are used to cook food for the pilgrims.

August to October is the season of the apples that Kullu is famous for. There are several apple orchards which you can visit and talk to the owners to learn about harvesting and sorting of apples. The rich red color of the apples will instantly attract your attention. The roads are lined with stalls selling boxfuls of red juicy apples waiting for you to grab a handful! 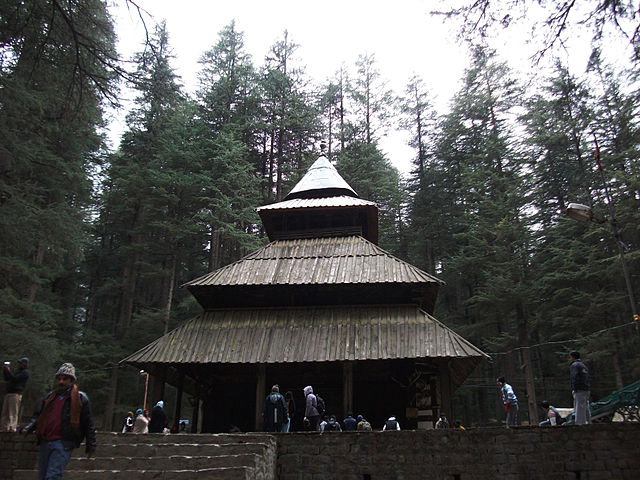 This is one of the most popular temples in Manali more for its Pagoda-styled structure. Set in a small glade and surrounded by tall deodar trees, the temple is dedicated to Goddess Hidimba. The architecture with the intricate wood carvings on the pillars and beams make for interesting photography. Outside the temple, look out for women carrying chubby rabbits. You can click a picture or two with the rabbits for a small price.

The famous Hidimba Devi Festival is held in the temple premises in May and is a colorful and lively affair.

Should Visit Places in Manali 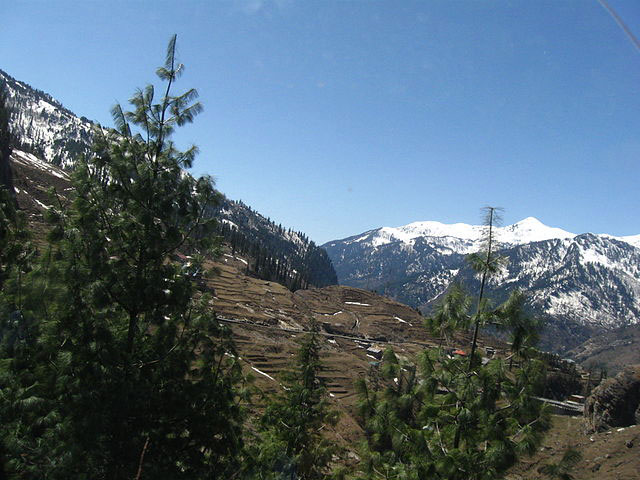 During the summer months of March to June, the picturesque landscape of Solang Valley is a hub of adventure sports. The area is located on the way to the Rohtang Pass and offers sports like paragliding, parachuting and zorbing. The surrounding snow-covered mountains and deep valleys provide an astounding view while you soar above in a parachute. The valley is a popular picnic spot for tourists and locals alike where families can spend a quiet and enjoyable day bonding with each other. 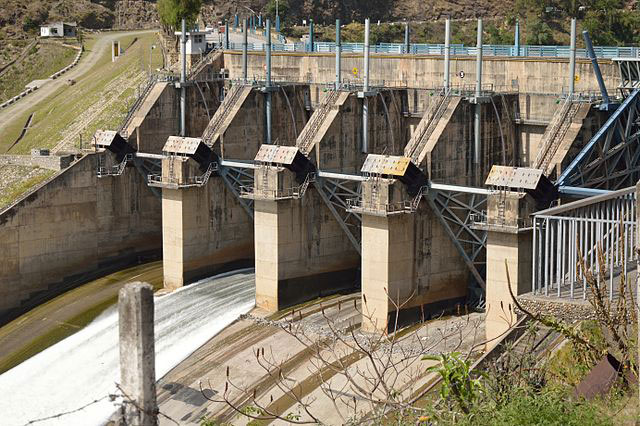 The Pandoh Dam situated in the Mandi district, several kilometers from Manali is a delight to capture with your camera. The dam connects the River Beas with the Satluj River and is the main generator of electricity that services the entire area. However, it is not allowed to park a vehicle on the bridge; best would be to park a little distance away and walk down to the bridge. If you are lucky, you might catch the amazing energy that is felt when the dam opens to release water. The nearby Pandoh Lake, a resultant water body from excess water of the dam is a beautiful place to laze around in peace and silence for some time.

Can Visit Places in Manali

The Bijli Mahadev Temple is one of the most popular temples in Himachal Pradesh where pilgrims visit in huge groups. The temple dedicated to Lord Shiva is situated some 22kms from Kullu and has a rather fascinating story going that attracts tourists in hoards. The roof of the temple has a 60 feet high staff that reached far into the sky shining brightly. The story goes that this staff was constructed for the purpose of attracting divine blessings believed to be contained in lightning flashes and this is the reason behind the temple’s name (Bijli means lightning in English). Furthermore, it is said that the stone idol of Lord Shiva shatters every time lightning strikes and the priest re-builds it using butter and flour!

Reaching the temple can be a little tiring though. A bus or cab takes you to the village of Chansari from Kullu. From there, it is an uphill trek for about 3kms that also consists of climbing quite a few stairs. However, the astounding view of Kullu and Parvati valleys from the top makes the tiring trek and climb completely worth it! 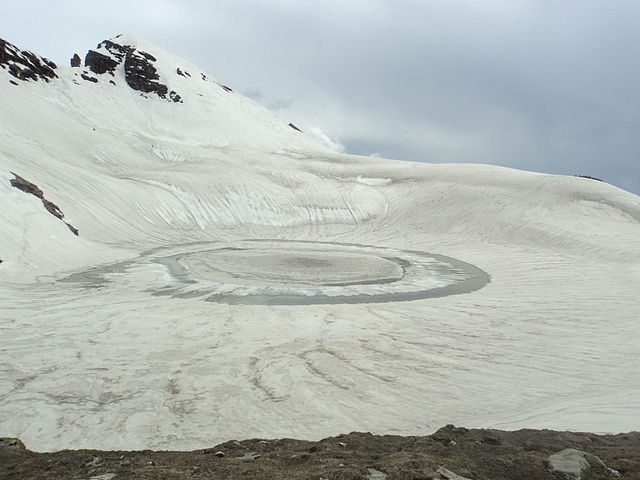 At 14,100 feet above sea level, this lake is never frozen completely despite the freezing temperatures and the surrounding areas being covered with snow. It is located a few kilometers away from Rohtang Pass and a small trek to the lake from the main road. Tourists like to halt here for some time to breathe in the fresh unpolluted air and capture the beautiful mountains around it. During the summer months when the snow is thinner, backpackers can go on a trekking tour that starts from the nearby Vashishth village and goes up to the Bhrigu Lake. 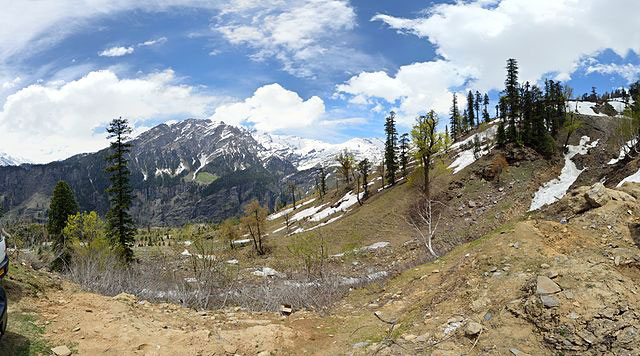 In case you are visiting Manali during the winter months of November to April when the Rohtang Pass is closed, Gulaba acts as a similar alternative. Situated close to the Rohtang Pass and Solang Valley, Gulaba is a flat area that is also covered in a blanket of snow throughout the year. There are several sports and activities available here, most notable of them being the snow scooters. Skiing can also be done here. A little above the flat area of Gulaba plateau, the area is serene and quite providing a peaceful place to just sit around and soak in the surrounding awesomeness.

The picture perfect hill station of Manali is a true romantic getaway that wills you to explore and make beautiful memories that will stay with you for a lifetime!