The attractions found in Ranthambore include Palaces, Forts, Lakes, Hindu Temples, and ruins of Historical Monuments that not only entertain the wildlife and nature lovers but history buffs as well.

The 800 year old temple is dedicated to the 3 eyed incarnation of Lord Ganesh known by the Hindus as ‘Trinetra Ganesh’. The temple is located within the confines of the majestic Ranthambore Fort and contains the images of Lord Ganesha and his complete family. The design of the temple is a great example of Hindu temple architecture and features an ornamental ‘Chatri’, a signature feature of Rajput buildings. Although the temple is open all day, it is best visited during the aartis (prayers), which feature several devotional hymns. The aartis conducted in the temple are divided into 5 rituals.

Wednesday, being the day of Lord Ganesh, is a good day to visit the temple. Special prayers and rituals are conducted along with the distribution of sweets and savory items.

A UNESCO World Heritage Site, the eponymous citadel of Ranthambore was built by the Nagil Jats who ruled the region around the 10th century AD. The fort sits atop a majestic elevation of 700 meters from the nearby plains and offers some spectacular views of the surroundings. The architecture of the fort is remarkable and exemplifies the signature designs of Hindu Rajput buildings. The walls of the Ranthambore fort are spread across an area of 4 kilometers which enclose a wide array of buildings such as palaces, temples, residences and step wells. The western area of the fort is the one that is mostly frequented by tourists and visitors, and contains temples and other buildings. The eastern region of the fort however, remains less frequented due to wildlife activity. The Trinetra Ganesh Temple (Three-eyed Ganesha) and The Gupt Ganga (secret Ganga) are some of the must visit locations inside the fort.

Caution: Interestingly, the eastern side of the fort is also frequented by the animals along with the big cats like tigers and leopards, so it is definitely not a place for any lonely adventures. 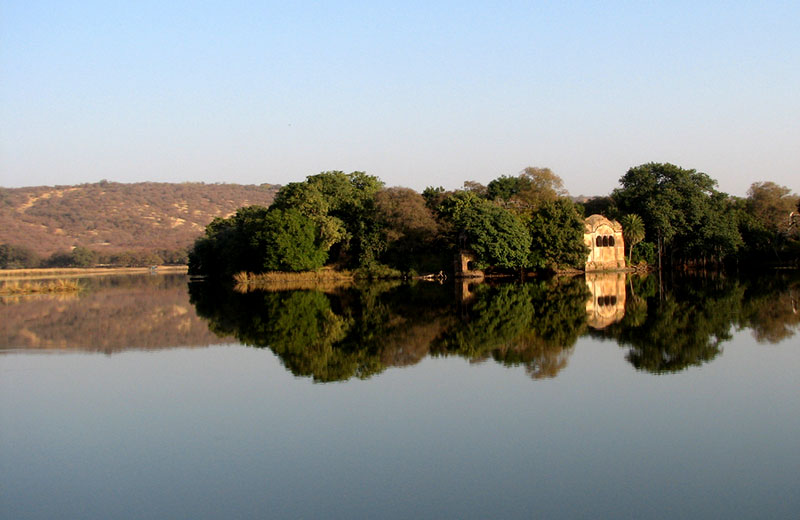 The semi-arid forests of Ranthambore are also famous for its several waterholes and small lakes which are great places to get a close view of the wildlife. Padam Talao is the largest of the water bodies in the park and is often called a lake. The place is majestic and if visited at the right season can be a haven for the wildlife photographers. Wildlife species like deer, monkeys, hyenas and Chitals can be spotted here from the safe confines of the treetop ‘Maachans’ (platforms). If lucky, you might also be able to spot the majestic predators like Tigers and Leopards who often lurk near these waterholes in search of prey. One could also visit the majestic Jogi Mahal, which is located at the banks of the lake. Padam Talao is also famous for the picturesque water lilies and lotus flowers that grow in abundance here after the rainy season.

Built as a hunter’s lodge during the reign of the Maharajas of Jaipur, Jogi Mahal is located at the banks of the picturesque Padam Lake. After the park was declared a wildlife reserve, the building was converted to a rest house to accommodate visitors. Although it is only used by the forest department now, it is essential to give it a visit and experience a great view of the surrounding nature. Right next to the lodge, is located what is known to be the ‘Second Largest Banyan Tree in India’. The banyan tree is said to be more than 600 years old and is a home to large numbers of Langurs and birds found in the national park.

Despite of being a large pond, the Rajbagh Lake is more of an archaeological gem. The lake is named after the ruins of the Rajbagh fort complex which is located at its banks. Although the grand arches and outhouses lie in a dilapidated condition, the surrounding nature has beautified the deserted buildings with creepers and vines that make it an enchanting location for visitors. The Rajbagh Lake is also an important location due to the high amount of wildlife activity that can be photographed here. It is common for visitors to see a lone tiger resting on the decrepit stairs of the fort, as the place is teeming with animals like Chital, Sambhar Deer, Wild Boars and several species of Birds.

Despite of being a large pond, the Rajbagh Lake is more of an archaeological gem. The lake is named after the ruins of the Rajbagh fort complex which is located at its banks. Although the grand arches and outhouses lie in a dilapidated condition, the surrounding nature has beautified the deserted buildings with creepers and vines that make it an enchanting location for visitors. The Rajbagh Lake is also an important location due to the high amount of wildlife activity that can be photographed here. It is common for visitors to see a lone tiger resting on the decrepit stairs of the fort, as the place is teeming with animals like Chital, Sambhar Deer, Wild Boars and several species of Birds.

The region is known for the high numbers of Panthers that it houses. Kachida Valley is located at the outskirts of Ranthambore and features several small hillocks and a picturesque rocky terrain. The region is the main stronghold of leopards in the area who gather here to avoid any conflicts with the teeming population of Tigers in Ranthambore. Tigers can also be spotted in the central area of the Valley along with Sloth bears and different species of deer. The best way to explore the area is by jeep or gypsy which provides ample amount of views and wildlife encounters.

The deepest forests of Ranthambore mostly lie in the Bakula Region. The area not only features the most dense forests but also several waterholes and pools that remain a prime area for wildlife activity. As the region is covered by dense tropical shrubs and is well fed with water, it is one of the best places to capture the majestic Bengal tigers in action. On several occasions one might be able to spot a tigress with young cubs beside one of the waterholes. Being one of the greenest areas in the national park it is also a haven for the nature lovers who like to have a nice time under a thick canopy of trees.

Located in the northern regions of the park, the Lakarda and Anantpura regions are known for their teeming population of Sloth bears. The anthills in the region make for the Sloth bear’s favourite food and one can often see a lone bear digging the anthills or honeycombs for food. Although Ranthambore is more famous for its high number of tigers, the Sloth bears are also a much photographed animal owing to its high numbers in the Larkarda and Anantpuraregions. Several species of monkeys, porcupines and striped hyenas can also be spotted in the region making it a must visit spot for the wildlife enthusiasts and shutterbugs.

Lying towards the south western region of Ranthambore, Kuwalji is located between a hilly region marked by the confluence of the Aravali and the Vindhyas. The region is actually a buffer zone for Ranthambore and is one of the best places for photographing the Bengal Tiger. Recently, Kuwalji has been incorporated in the park and has been assigned as Zone No. 9. The main attraction here is the Kamaleshwar Mahadev Temple, said to have been built between the 7th and the 9th centuries and is dedicated to Hindu deity Lord Shiva. Believed to have been built by the Pandavas from the Indian epic Mahabharata, the temple is also referred by the tourists as “mini Khajuraho“. This is due to the several stone carved sculptures depicting activities like yoga, battles, love, dance along with sculptures of deities, various animals and mythical creatures that can be found here. Although, most of the structures are in a ruined state due to years of neglect. Bijasan Mata Temple and the Step Well or ‘Baori‘ are among the other famous landmarks here.