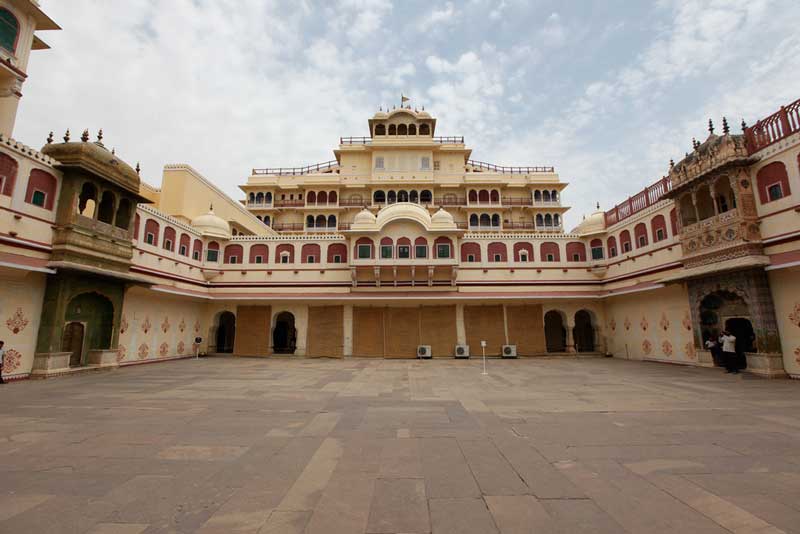 Located in the center of the walled city of Jaipur, the city palace was built by Sawai Jai Singh II in the 18th century and it became a residence for the Maharajas of Jaipur ever since. The palatial complex contains several gardens, palaces, temples and a museum, all built in a unique mix of different architectural styles. The traditional Hindu Rajput architecture, with hints of Mughal and European styles makes this palace a must visit for history buffs and for those who want to experience the grandeur of the Royal Family of Jaipur.

The layout of the palace was designed according to the ancient principles of Vastu Shastra and yet is very urban in its architecture. There are a total of 4 gates to the city palace namely, Tripolia Gate, Virendra Pol, Udai Pol and Atish Pol. The Tripolia Gate leads to the residential quarters of the palace, which is still used by the erstwhile Royal family of Jaipur and hence, the entry is restricted. Visitors can enter through the remaining three gates, which are all designed in a marvelous culmination of Indian and Persian architecture. 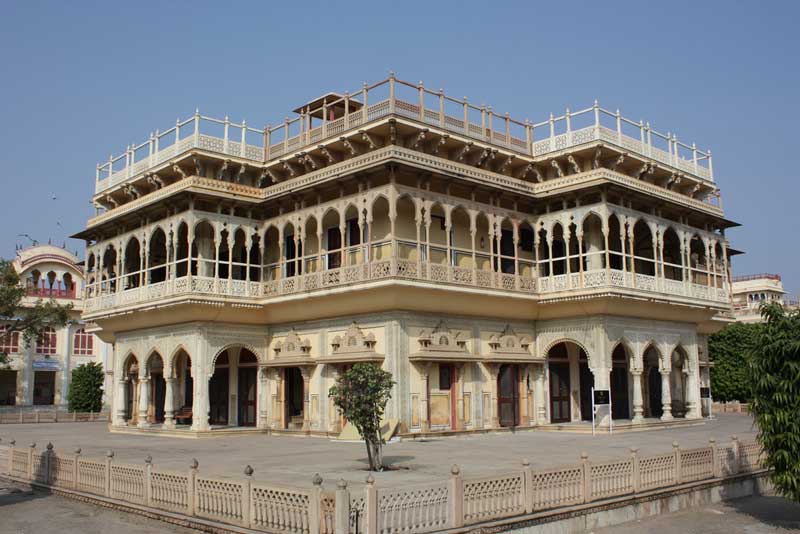 The word ‘Mubarak’ translates to auspicious and is a splendid mix of different architectural styles. The Mubarak Mahal was constructed by Maharaja Madho Singh II around the late 19th century. Its construction was completed in early 20th century and is considered to be one of the most beautifully designed 20th century buildings in the world. The structure is made from carved dolomite or Jeypore marble and contains several ornamental designs on the walls, ceilings and balconies that reflect the cross between Hindu and Mughal designs. Used during the older days to welcome the foreign guests of the Maharajas, Mubarak Mahal is currently used as a textile museum. One can see the different royal costumes with several exquisite textiles such as Sanganeri prints and embroidered shawls. The main attraction in this museum remains the hefty clothes worn by the hulking Maharaja Madho Singh II. 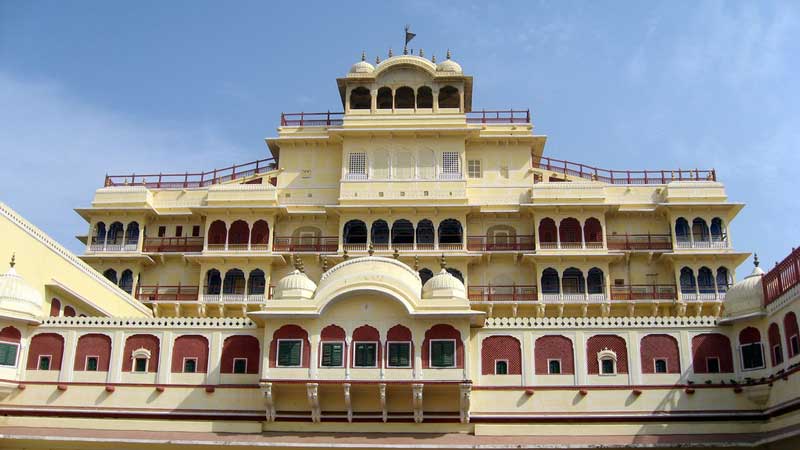 Located towards the western end of the complex, the Chandra Mahal is a 7 storied building, which is still used as a residence by the Royal Family. The building can be entered via the amazingly designed peacock gate and only the ground floor is open for visitors as it houses a museum. One can also see the quarter and a half flag (a royal sign of the Maharajas of Jaipur) when the King is at his residence.

Although this building has currently been converted to a museum, it was originally known as the Queen’s quarters. The museum contains several arms and weapons used by the Rajputs through their various battles in the 15th century. The structure of the palace is essentially Hindu with Islamic style frescoes on the ceilings, which are preserved with jewel dust. Several daggers and swords, including the scissor dagger and pistol swords are displayed in this museum. The ceilings of the palace are inlaid with fine mirror work and gold leaf, which often leave the visitors astonished and awestruck. 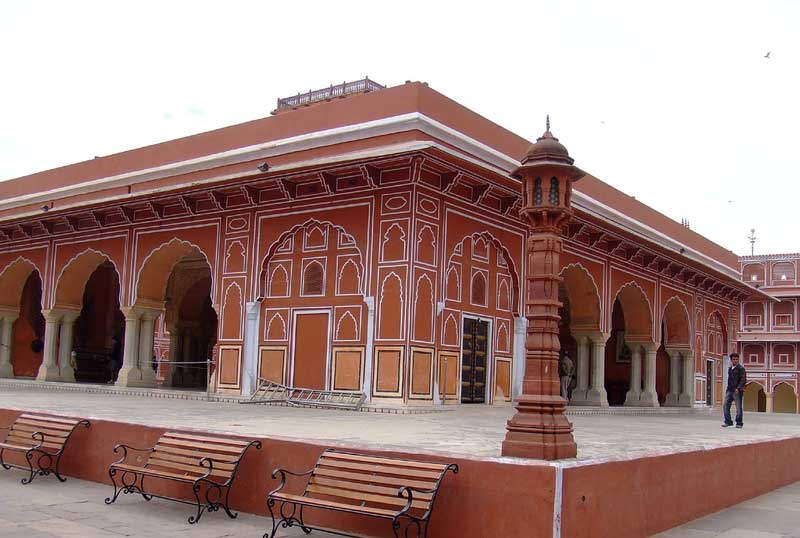 The Sanskrit name of this courtyard is Sarvatobhadra and it served as the private audience hall for the Maharajas of Jaipur. The Kings would conduct all their formal meetings with ministers and ambassadors in the Diwan-i-Khas, making it a place of high importance. The structure is again designed with signature Hindu and Mughal architectural influences and built in pink and white marble. The structure also houses two largest sterling silver vessels in the world. These vessels were cast from melted silver coins and were used by Madho Singh II to store water from the Ganges during his trip to England in the year 1901.

Used by the Maharajas to listen to the public opinions and grievances, the Diwan-i-Aam is currently used as an art gallery. The strikingly colorful ceiling and the ornamental design of the building is a marvel in itself. In this galley are some of the most exquisite works of art, miniature paintings from Rajasthan, Persia and the Mughal artisans, and several handwritten copies of Hindu scriptures such as the Bhagwad Gita. One can also have a look at the Maharaja’s throne called the Takht-e-Rawal, which could also be mounted on the back of an Elephant.

The name Bhaggi Khana translates to carriage museum and contains an exquisite collection of carriages and palanquins used by the royal family. One can also find a special carriage presented by the Prince of Wales in 1876 during his visit to Jaipur (this was the same time the city was painted pink). The miniature chariot was used to transport the religious idols during various Hindu festivals and a special palanquin designed for the royal priests.

Photo by Richard Moross, CC BY 2.0