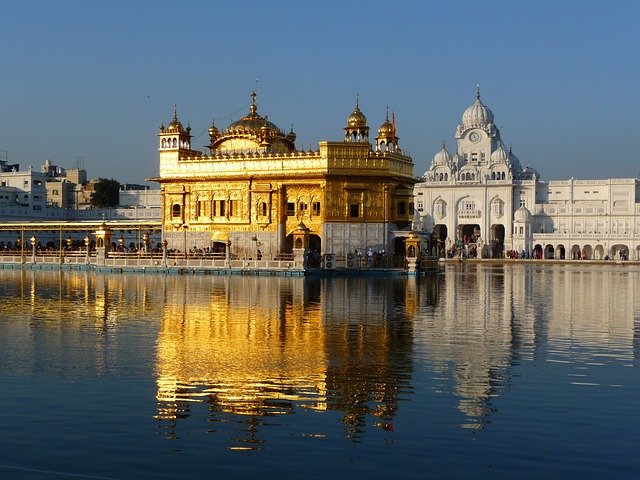 The vibrant city of Amritsar, aptly nicknamed ‘The Golden City’, is one of the largest cities in Punjab and situated on the extreme north-western part of India, it shares a border with Pakistan. The Sikh people are known to be a very energetic and colorful lot and likewise, the city of Amritsar holds ample testimony of its lively and rich culture. The city has its fair share of political significances, at the same time being one of the major religious hubs of the Punjabi people. Going far back in history, Amritsar is a subtle mix of modernization yet preserving the old world charm of the British Era.

Best time to visit (November to March) – The pleasant winter months of November to March provide the best opportunity for comfortable site-seeing. The daytime gets a few hours of sunshine, though at night the temperature may sometime drop to around 4 degree Celsius.

Tip: The month of January provides the best experience with the colorful Lohri festival and also the elaborate Republic Day Ceremony at the Wagah Border on 26th January every year. The Guru Nanak Jayanti festival in November is also worth experiencing for its display of authentic Sikh culture and traditions.

Good time to visit (July to October) – During the monsoon months of July to October, Amritsar is hit by heavy showers of rainfall. The city becomes sparklingly radiant and site-seeing is an enjoyable experience, especially the shining Golden Temple.

Visit with Caution (April to June) – The sweltering heat of Indian summers envelope Amritsar during the months of April to June. The temperature almost touches 50 degrees Celsius and becomes a hamper for comfortable site-seeing rendering it a not-so-good time to visit the city.

By Air – Amritsar has its own airport, the Raja Sansi International Airport, located at a distance of a mere 11kms from the city centre. The airport is serviced by all major domestic and international flights throughout the year.

By Rail – Amritsar Junction, the main railway station in the city has a wide network of trains connecting it to all corners of India. Additionally, the famous train Samjhauta Express runs from Amritsar to the Wagah Border and then crosses on to Pakistan.

By Road – Amritsar is well-connected with all other major cities of India via the network of National Highways. Luxury buses ply everyday between Amritsar and other nearby cities. The city is also connected with Delhi via the old Grand Trunk road and is about a 6hrs drive.

Amritsar is an enterprising city with vivacious people and a colorful culture steeped in their unique customs and traditions and elaborate festivals. Some of the places to check out while vacationing in the city are:

Must Visit Places in Amritsar 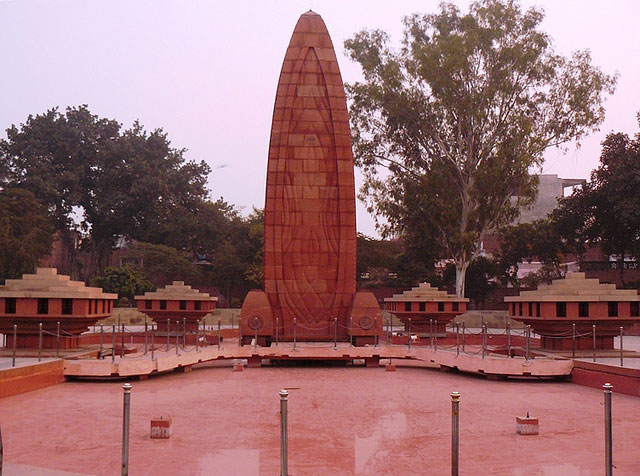 Jalianwala Bagh holds a place of important national significance in the history of India as the venue of the infamous Jalianwala Bagh Massacre of 1919. Amidst the joyous celebrations of the Punjabi New Year on 13th April 1919, Jalianwala Bagh was attacked by British Troops who started shooting into the crowd haphazardly. Hundreds of people including women and children were killed and more than a thousand were injured leaving the place bloodied and forlorn. Later in 1951, the place was turned into a garden with a memorial structure constructed in memory of all those who lost their lives on the tragic day. The black marble structure is flanked by stone lamps on its four corners and has a plaque with inscriptions telling the story of the massacre. The park is accessible through a narrow alleyway opening onto a well-maintained park, beautifully decorated with blooming plants and green lawns.

Harmandir Sahib or more popularly known as the Golden Temple is one of the biggest and most stunning Sikh Gurudwara that attracts pilgrims from all over the world in hoards throughout the year. The jaw-dropping beauty of the temple is a sheer delight for the eyes and the camera as it gloriously sit on the banks of a sparkling holy lake called Amrit Sarovar. The temple has an enormous central dome gilded with pure gold that glints spectacularly in the first rays of the sun at daybreak. The temple has four intricately decorated entrances on all four sides which is said to signify that people from all walks of life are welcome to the place. There are numerous Sikh inscriptions adorning the internal and external walls of the temple. Inside the temple, the ceiling is a masterpiece in itself, infused with colorful precious stones and lined with gold designs.

During the festive occassions of Vaishakhi in April, Guru Nanak Jayanti in November and Diwali in October, the Golden Temple is decked up with colorful lighting. The celebrations are a spectacle with a show of the unique Sikh traditions and customs

Tips: In conformity to Sikh religious policy, one has to wear a Bandanna covering the head while entering the temple premises. Shoes also need to be removed before entering.

Should Visit Places in Amritsar 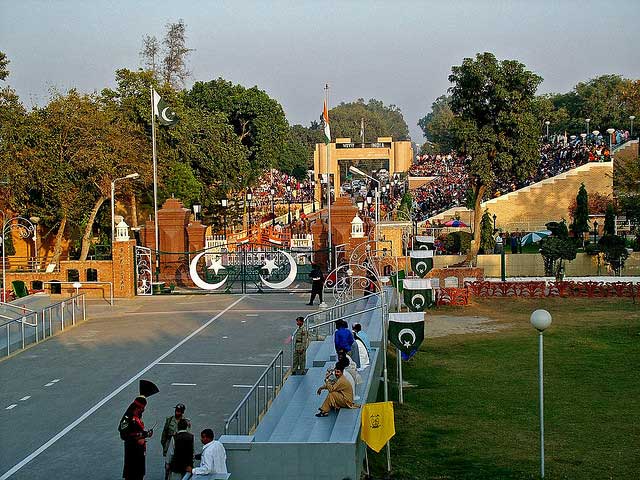 Photo by Guilhem Vellut, CC BY 2.0

The Wagah Border is an eminent landmark situated between Amritsar, India and Lahore, Pakistan that divides the two neighboring countries. The heavily guarded area is under massive military scrutiny at all times and lie on the old Grand Trunk Road. The village of Atari lies next to the border inside the Indian premises and Wagah Railway Station is the last Indian station before the railway tracks cross onto Pakistan. Two sets of heavy metal gates which usually remain open from sunrise to sunset guard the two countries with the white demarcation line running at a parallel between them.

Every evening witness an elaborate 45mins Beating Retreat Ceremony where the gates are closed and the national flags is lowered by both countries perfectly in sync with each other after a short parade and salutation. This ceremony takes on a more elegant and colorful form on 26th January and 15th August of every year when millions of people gather at the place to watch the commemoration.

Caution: Being in a nationally sensitive region, there is no cell-phone network in the area. Careful physical checks are carried out and covered bags and ladies’ purses are not allowed to be carried. 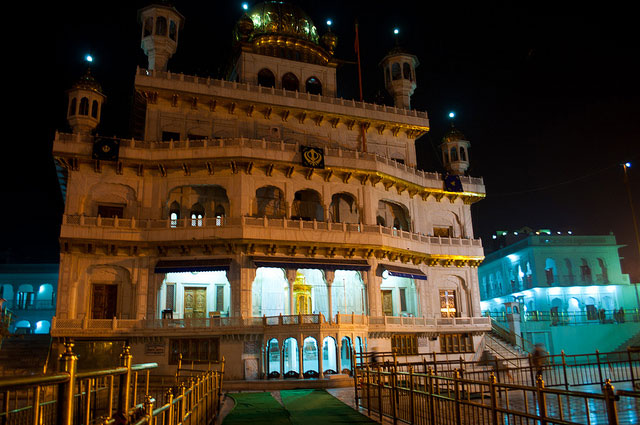 Akal Takht roughly translated to English means ‘the timeless throne’ is one of five Takhts and is regarded in high esteem in the Sikh religion. The Sikh people follow that the throne, which in fact was a raised spacious platform, was built by their great Guru Hargobind and is the seat of supreme authority from where the Guru preached and ruled over his people. The Akal Takht is located inside the sprawling campus of the Golden Temple and housed inside a white building called Akal Bunga. The building is an example of beautiful architecture with intricate designs carved on marble and lined with gold foils. It also features a small dome encased in gold.

Can Visit Places in Amritsar 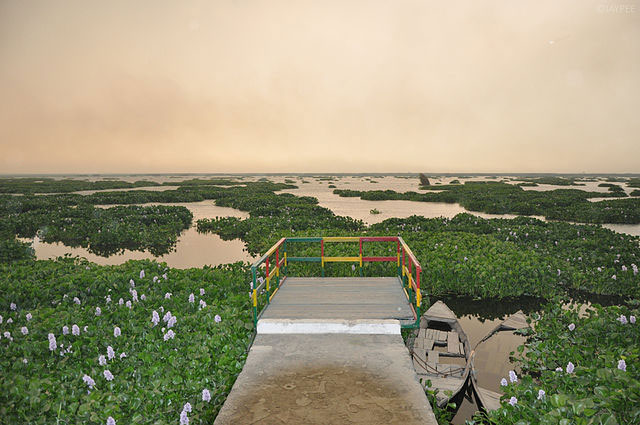 The beauty of Amritsar extends to its bright flora resplendent with dense green vegetative cover. One of the best places that serve as a nature lover’s favorite retreat is the Harike Wetland and Bird Sanctuary located near the Ferozepur-Amritsar border. Also known as Hari-ke-Pattan, the wetland is significantly one of the largest of its kind in North India. The sanctuary is home to a large number of fauna like different species of turtles, fishes, mongoose, otters, jackals and the Indian Wild Boar. The sparkling freshwater Harike Lake is fed by the rivers Beas and Satluj and provides a haven for more than 300 species of migrating birds. During the winter season, when huge flocks of birds arrive from Siberia and the Arctic countries, the several colorful species of woodpeckers, ducks, gulls, goose, vultures and pigeons are a treat to watch. Ensure to carry a powerful pair of binoculars and camera while visiting the sanctuary.

A trip around Amritsar is an exhilarating experience and one that goes a long way in depicting several facets of India, be it in their religious arena or the places of national importance.